U13s Get Off To A Great Start

The U13s travelled to York RI for their first game of the season. With the girls making the change from 7 a side to 9 a side it was a huge leap into the unknown.
With only 1 practice game under their belt and not even the full team being together once the girls acquitted themselves really well.

The Scorchers had to play with only the 9 players and no subs so every girl had to pay their part and they certainly did. Abs was outstanding as skipper and bagged herself a hat-trick, Livi and Connie grabbing a goal each as they finished 5-0 winners.

Picking player of the game was nearly impossible as every girl was oustanding but after a lot of thought it went to Jasmine for her 'David Battyesque' game in the middle of the park. All game she broke up York RI's attacks and played great simple passes which launched attack after attack.

A big thankyou to York RI for switching the game to their place and also for the excellent sausage sandwiches that all the girls from both teams enjoyed.

A great morning's football played in a great spirit. 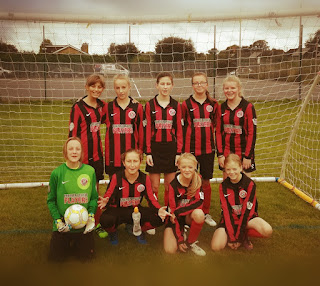 GO SCORCHERS!
Posted by The Scorchers at 3:35 pm