U13s Play Their First Game in Their New Strip

Yesterday the girls made the short trip to Poppleton to play their first game in their brand new strip kindly sponsored by Evans Halshaw Harrogate Hyundai.

Unfortunately for the U13s they are without their goalkeeper who has broken her wrist so lets hope she makes a speedy recovery soon. GET WELL ASAP.

The team welcomed 2 new players in Keira and Charley who both had great debuts and thanks to Therese who helped out due to the team being short of players.
Abs skippered again and shared the goalkeeping duties with Connie, well done girls putting the team first.

The girls were just adjusting to the new personnel when Poppleton scored a screamer into the top corner from long range. Nothing anybody could about that.
In the second half the Scorchers fought back and Abs popped up with another goal to level the scores.
Poppleton then lay siege to the Scotton goal but the girls held firm and were defending amazingly but just when it looked like they might hold out for the draw Poppleton sneaked in a low shot and snatch the win.

Tough on the girls but no complaints, another great game of football and plenty for the girls to work on. If this is an indication of things to come then the future looks.....Scorching!!!!

The girls looking splendid in their new strip. 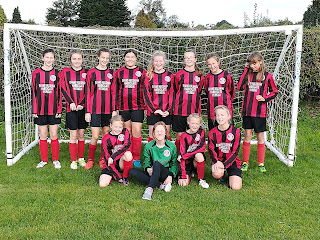 Girl of the game went to Lucy for another great performance in defence, well played.


GO SCORCHERS!
Posted by The Scorchers at 3:58 pm